We recommend that you reserve your place in advance as there may be high demand for the tours, especially in peak season. By pre-ordering you are guaranteed a place at the selected departure when the booking is confirmed by us. Furthermore we recommend that you don´t bet everything on one day since weather conditions may cause the trip to be delayed or cancelled.

This tour will take you along the stunning west coast of Andøya from Andenes to Stave. We begin by cruising through the inner archipelago around Andenes and continue towards Bleik fishing village and Bleik Bird Island. From Bleik we drive to the three hidden beaches of Andøya, Otervika, Rækvika and Høyvika (only reachable by foot or boat) before we return towards Andenes.

During the bird breeding season from mid-April to mid-August you will experience a gannet colony, a shag colony and one of the most important puffins colonies in Northern Norway with thousands of breeding pairs. Other seabirds that we normally encounter are razorbills, kittiwakes, cormorants, Arctic skuas, common and black guillemot.

The majestic white-tailed eagle can be seen in great numbers all year round.

Other species that we sometimes encounter are, harbor seals, and different whales species such as harbor porpoises, orcas, pilot whales and Atlantic white-sided dolphins. No guarantees ☺
This tour is also offered as a midnight sun tour during the summer season from 22. May to 22. July

Show all nearby accommodations 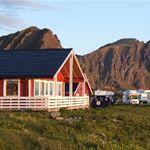 Distance: 3 km
Andenes Camping is beautifully located at the entrance to Andenes and accommodates campers, caravans and tents. Here you will find a breathtaking view of the ocean that you can enjoy when you have parked and immersed yourself in tranquility.
Book
Build: 5/26/2020 4:55:36 PM, Host: online3core17, DB: o3.cbguide-8014.cbischannel-27231.v1 online3data03.db.citybreak.com:8080, Controller: Activity, Action: showdetails
Book Now